A little while back I came to the realisation that I had yet to build a deck with actual physical cards that made use of Tactics Imrahil, which I definitely wanted to rectify since he’s an incredibly fun hero to use. So I threw this together (more or less) for a three player game and was very pleased with it. OK, I have tweaked it ever so slightly since but the core is still the same.

The basic idea was to just put all the focus on the use of Imrahil’s ability. So filling most of the deck with allies. The potential difficulty I anticipated there was that with a diverse pool of allies I couldn’t necessarily be sure at any given moment if I’d pull out a good defender or a good attacker, so I want my heroes to be flexible. Fortunately the obvious way to go with that is Raiment of War and Captain of Gondor on Imrahil, and Raiment will also go nicely on the various Warrior allies I’m including for his ability. And then for another hero choice the much-maligned Dori is also a decent fit since he can flexibly switch between boosting defence, defending himself, and contributing attack (though I initially forgot that for whatever reason he isn’t a Warrior). No other hero sprang to mind for that sort of flexibility (Except Na’asiyah, but combining Imrahil and Na’asiyah might be too much strain on my resources if I want to be able to play cards as well), but I figured that’d be enough so the group is rounded out with Eowyn, whose +9 attack ability could also come in handy if I’m ever short of securing a kill (most likely early in the game).
One significant point I had to bear in mind about the ally selection was that I was intending this to cover combat requirements for a 3-player game and so I definitely wanted to include a decent amount of Ranged and Sentinel. And while I didn’t specifically intend it to turn out this way, the deck ended up about 80% allies – obviously I wanted a high ally count to have high chances of always finding something useful with Imrahil, but as it turned out there was also very little else I wanted to put in the deck. Actually originally it was weighted slightly even more towards allies but one of the few changes I made to the deck before posting it was to fit in Secret Vigils to stave off potential threat issues.

The sideboard should be pretty self-explanatory – more allies, Oath of Eorl is a powerful enough event to be worth considering, though on the other hand it may be a bit on the expensive side for the way the deck runs, and speaking of expense Hirgon could be a viable alternative to Eowyn so you can play your allies cheaper (of course you’re relying on the other players to carry most of the questing load anyway). Factoring in those savings there could also be an argument for trying Na’asiyah instead of Dori since you might have some more spare resources, but I’m still not too sure about it. Speaking of alternative heroes, I did consider Tactics Eomer as an option as well, since it’s entirely feasible to use some of the allies Imrahil pulls in as chumps to trigger Eomer and he’d be a bit more consistently available attack power, though I don’t know how necessary that really is.
If you are sideboarding: bear in mind that ally Elfhelm is intended to be cheated in with his ability, which requires a Rohan hero, so if Eowyn is replaced with Hirgon you should probably sub in a different ally. Ally Legolas while he’s usually a big deal in Tactics decks is less so here since the cards in your hand are often less important than the top 5 in your deck which Imrahil can cheat in (though finding the attachments and Feints faster may be an advantage). Other than that I’d say it’s down to your own ally preferences – though you may want to bear in mind your proportions of Ranged and Sentinel as I brought up earlier.

As I mentioned, the cards in your hand aren’t necessarily that significant and thus neither is card draw. That’s largely because you expect to be spending Imrahil’s resources on his ability so you only have two resources per round to spend on cards in the Planning phase – so you won’t be playing cards quickly, and thus you don’t need to be drawing them too quickly either. Of course as is often the case with Tactics decks, it doesn’t matter too much which cards you are playing since pretty much all of them will help with combat one way or another. It’s probably best to prioritise getting more attack power so enemies don’t have a chance to mount up – though getting extra defenders also makes sense and the mounting enemies problem can be averted partially by Eowyn.
Since you won’t be playing your cards too quickly you shouldn’t be too concerned about discarding some spare allies (probably the more expensive ones) to Watcher of the Bruinen if it comes up. Nor should discarding from the top of your deck with the Longbeard Sentry be an issue – there’ll be plenty left. And of course, getting an ally on the top of your discard pile will power up the Mithlond Sea-watchers (with that in mind you could consider triggering a Longbeard Sentry even without needing to, since the odds are strongly in favour of you discarding allies). Ally Elfhelm of course is another option to be cheated into play for only one resource (from Eowyn) if you need more support in a given Combat phase.

Obviously this deck should be paired up with decks which can handle questing as it’s almost entirely combat-focused. If the other decks can handle a little combat early on that may come in handy since this deck’s board state will take a little time to establish (and conversely of course Eowyn provides some early questing power so there shouldn’t be a shortage there) but either way things should be manageable under normal circumstances – obviously exceptions are made for quests with unusually dangerous enemies or perhaps which swarm you with enemies, and of course the occasional issue of quests which start everyone engaged with an enemy are another variation of difficulty in this regard.
Once this deck gets going it can easily have a surplus of combat ability compared to the number of enemies which actually need to be killed. 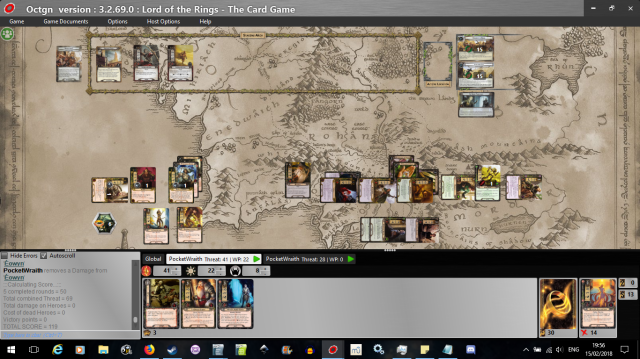