While I highlighted the improvement of Nightmare decks beginning at Peril in Pelargir, Into Ithilien is the quest which really cemented that feeling for me; since in general they took a very difficult and sometimes unfair quest and transformed it into a more difficult but fairer one, and in specific the Nightmare deck actually removes my most hated card from the encounter deck. 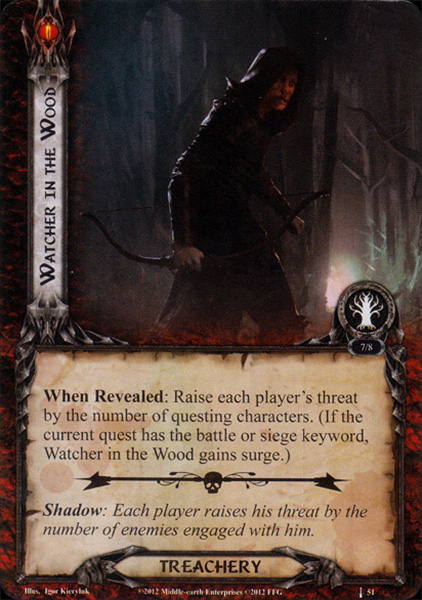 I’ve talked about it before, but I think it bears repeating. Watcher in the Wood I feel is somewhat manageable in solo, in two player you can probably eat the effect once but the second will likely cause a loss to threat, and at higher player counts you really just need to cancel it every time. Thankfully in Nightmare that is no longer a concern! Of course I do still have to contend with Blocking Wargs and Southron Support, but that’s a challenge I’m more willing to accept.
So besides that notable positive change, what else is different in the Nightmare version of Into Ithilien? Well, the addition of the Mumak Elite encourages players to play the intended way and try to keep Celador alive rather than simply letting him die, which was (and probably still is if you have a plan for the Mumak) an effective but not particularly thematic strategy which could be taken. However the additional card which has the biggest impact on deckuilding (or choice of decks if you’re not custom-building) to my mind is the Ithilien Overlook. If you want to avoid characters dying (which of course would damage Celador and push you towards a Mumak Elite if it happens early on) you really need to be prepared for this – which as I realised when testing my initial deck ideas, means you really need to bring at least one 5 hit point hero to the quest, as it’s really easy to end up with Archery 4. And healing, of course.
Changes aside, the quest retains the interesting point of putting you through all three forms of questing, and the starting active location of the Ithilien Road remains a defining feature pushing you towards a lot of out-of-the-gate Battle questing power to avoid engaging too many enemies until you’re a bit better prepared for them. So this and the above points mean my guiding principles in building decks for this quest were 5 hit point heroes, healing, early attack power, and means of taking threat out of the staging area (since that benefits all types of questing).

Thoughts: Gimli and Boromir both have 5 hit points, Gimli of course actually benefits from taking damage, and of course the standard companion to Gimli is Citadel Plate for even more hit points. While Gimli I the primary target as usual, should I find the third copy or feel the circumstances are worth an exception, it only costs 2 on Beregond. Boromir of course is great for both Battle and Siege questing and can still be ready for combat afterwards without anyadditional cards required.
Between Beregond, Boromir, White Tower Watchmen, Defenders of Rammas, Feint, Behind Strong Walls and Gondorian Discipline I should have plenty of ways to deal with enemy attacks, and the attack isn’t too shabby either between Gimli, Boromir, Galadhon Archers, Westfold Outriders and a few weapons. Obviously the high amounts of attack and defence also apply to questing, though as I intend to go to stage 3 I can’t neglect willpower, hence Envoys of Pelargir, Bofur may well quest, and White Tower Watchmen perhaps. Blades of Gondolin allow me to potentially make a little extra progress outside of questing. And of course I can remove threat from the staging area either by discarding a Westfold Outrider to engage an enemy (this may be especially useful on stage 3 when enemies cannot be engaged normally) or by playing Saruman. Saruman is an unusual choice to be sure, but assuming I can keep my threat reasonably in check, the chance to completely ignore some horrible enemy (e.g. a Mumak, Elite or otherwise) for a round could be very valuable.

Thoughts: This is an odd choice to be sure. Well, it’s several odd choices. Perhaps not ideal for a difficult quest, but I’m hoping I can make it work all the same. Elrond and Glorfindel are fine obviously, Elrond being obvious for the healing boost and Glorfindel primarily for his hit point pool but also Asfaloth. Fatty Bolger does rather stand out as a hero choice many might question, but I did bring up the idea of improving my questing of all types by simply disregarding threat in the staging area, and Fatty is a repeatable way of doing so. Given the disadvantage of raising your threat for his ability, I obviously want some good threat reduction, which led me to some of the other choices, like Wandering Tooks and Hobbit Pipes. Of course with the Tooks I will have the option of passing the Pipes across the table to spread the draw around just like I did when I played Wastes of Eriador. We’ll see if it works out for me.
To further my desire of keeping the staging area clear of threat all the time we have Northern Trackers (also they’re better at Battle/Siege questing than regular) and Ithilien Trackers. I have omitted Ranger Spikes which would usually be an obvious inclusion for staging threat mitigation, but in this particular instance given the existence of the Ithilien Overlook I don’t want to take the risk of Ranger Spiking an enemy with Archery – I’d rather just kill everything to be safe.
OHaUH Gandalf of course is equally good at all varieties of questing, and I’m hoping the amount of threat reduction I’ve included will be enough to offset him, Fatty, Deep Knowledge, Saruman and Boromir – perhaps not, but of course I don’t necessarily expect to hit all my threat raises in a single game, and I’m not planning to hang about in Ithilien for too long, rather I probably want to get quickly established and then sprint to the end of the quest before anything can kill me. Let’s see if it works out!