Posted on September 8, 2015 by PocketWraith

So now I come to the second forum challenge, which was to beat Into Ithilien without using any Leadership or Tactics cards. Into Ithilien being somewhat heavy on the combat, and on Battle/Siege questing, beating it with the generally less combative Spirit and Lore spheres is certainly an interesting challenge. However it was less of a challenge for me because I already had a Lore/Spirit deck built specifically with the intention of beating Into Ithilien, as I mentioned in my first Deck Spring Cleaning article a little while back. That deck did include four Tactics cards, two copies each of Vassal of the Windlord and Winged Guardian to be played via Elrond and help with Battle and Siege questing respectively, but then it was simple enough to just take those out and tighten focus on Vilya.

Nonetheless I’m still going to talk briefly about the demands of the scenario and my consequent deckbuilding process. The first really big demand of Into Ithilien is powerful Battle questing right out the gate. Generally you don’t want to have to engage all enemies on round 1, so it’s imperative to clear the Ithilien Road right away. Tricky without Leadership and Tactics, but Lore Faramir is fantastic for it. More generally, Into Ithilien is not a quest in which you generally want to be hanging around. You want to get going fast and speed through the quest before it kills you. So taking advantage of some fast draw from Lore is good. Vilya of course is very powerful, saving resources and speeding up the deck even more. Healing counters archery and keeps Celador alive, Lampwrights can avoid the nastiest surges (Basic principle – always name treachery) and otherwise mostly just a bunch of stuff to counter enemies.
This might be more difficult two-handed rather than solo, but I play two-handed much more than I do pure solo so I thought I’d go this way. Plus going pure solo can present it’s own, different set of challenges.

My first attempt was very short. An Overgrown Trail left me just short of clearing the Ithilien Road, then a Blocking Wargs shadow killed my chump-blocker. Dead hero round 1? Reset time.

Second time was pretty much a breeze. Light of Valinor and Wingfoot in my opening hand so I could get rolling right off the bat for questing and combat, plus a reasonably gentle start from the encounter deck made it not actually that difficult. Flush with success, I decided to try the Nightmare version of the quest…

Pretty good. Light of Valinor is what I’m really looking for of course, but I’m very happy with everything else as well.
Encounter setup is of course the Ithilien Road as active location, Celador and Southron Company in the staging area.

Planning: Light of Valinor, Envoy of Pelargir (resource on Glorfindel).

Encounter: Morgul Spider (which has +1 attack).

Combat: Elrond defends, taking 1 damage and readies with UC. He and Glorfindel kill the Spider.

I was thinking of engaging the Southron Company at this point, as it’s good to get things fairly clear before advancing to stage 3, but it occurred to me at this point that since I didn’t have the resource available for Hasty Stroke, and Elrond being already damaged, it’d be too risky.

Combat: Warden of Healing heals up the damage on Elrond and Celador.

Combat:
The Captain grants each Harad enemy in the staging area Archery 1, including himself, so I put 1 damage on Glorfindel.
Elrond defends the Company. 5 – 3, he takes 2 damage, plus 1 more from a Blocking Wargs shadow.
Warden heals Elrond back to 3/4 HP and Glorfindel back to full.
Elrond, Glorfindel and the Envoy attack for 6, but the Captain gives the Company +1 Defence, so he lives.
I use my Stargazer.
Southron Company – 1/5.

Planning: Wingfoot on Faramir, Vilya on Elrond, use Vilya to put Unexpected Courage on Faramir.

Travel: Ithilien Road, as the Ranger Spikes mean I still don’t have to engage the Captain.

Planning: Ranger Spikes, Vilya Unexpected Courage onto Elrond. Stargaze ready for next round.

Having two Haradrim Captains on Ranger Spikes isn’t ideal, since they stack, so now all Harad in the staging area (including them) gain Archery 2, and all engaged Harad have +2 Defence. I still prefer to leave them there though (not that I have a choice right now, since stage 3 prohibits me engaging enemies). 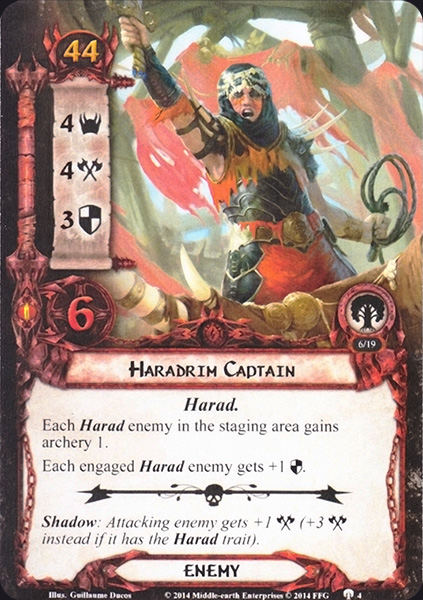 Planning:
MA draws Test of Will and another MA. MA #2 draws Envoy of Pelargir and Warden of Healing.
Arwen, Vilya Ithilien Tracker.

Planning: Warden of Healing. Stargaze again because most of what I saw last round was unhelpful. Vilya Minas Tirith Lampwright. Envoy of Pelargir (resource to Elrond). 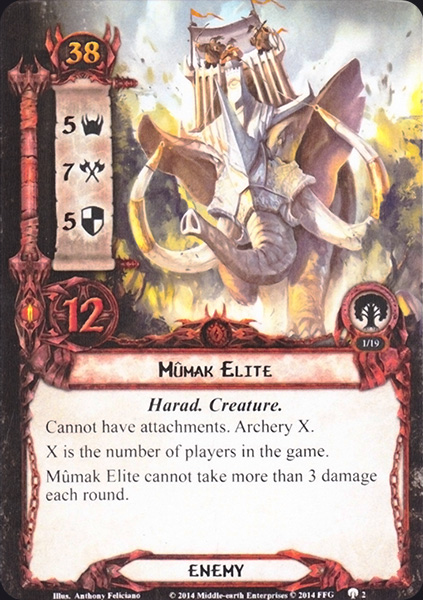 We’ve really been seeing how playing solo takes some of the challenge out and in the case of this quest particularly can make a slower pace more palatable. That’s the first time I’ve seen a really nasty treachery so far this game, and I just cancelled it. That added simplicity is also why I’ve made less comments than I did for the last challenge, because I think most of what I did basically speaks for itself. They’re all fairly obvious plays. Things do start to look a bit more hazardous at this stage however.

Encounter: I have no choice but to engage the Mumak Elite and the Southron Company.

Combat:
Archery 5 – Faramir 2, Glorfindel 2, Ithilien Lookout 1.
My two Envoys of Pelargir will lay down their lives to the attacking Mumak Elite and Company. Celador takes 2 damage.
My Wardens will heal Faramir (4/5), Glorfindel, Celador and the Ithilien Tracker (he has the most hp of my allies, and I need archery soaks right now).
Even with +2 defence, I still have more than enough attack to kill the Southron Company. I’m not even going to try and kill the Mumak Elite. It’s too tough and would take too long even if I did have enough attack power.
Mumak Elite – 12/12.

Refresh: 42 (Including extra from the quest stage).

A little worrying to note that if I maintain my current pace of questing I will win the quest with 48 threat. A bit close for comfort since there are a couple of Doomed cards in the encounter deck, though at least I don’t have to worry about Watcher in the Wood in the nightmare version.

Encounter: I engage the Haradrim Elite.

Combat:
Archery 5 – Glorfindel 2, Ithilien Tracker #1 1, Ithilien Tracker #2 2.
Ithilien Tracker #2 defends the Mumak Elite and is crushed to a fine paste. Celador takes 1 damage. Shadow card was the regular Mumak, so at least I don’t have that to worry about.
Faramir defends the Haradrim Elite and readies with UC. He takes 2 damage (this is why I didn’t use him for archery).
Faramir, Glorfindel and the Lookout are enough to kill the Haradrim Elite even with the defence buff from the two Captains.
My Wardens heal Elrond, Faramir (4/5), Glorfindel and Celador. I stargaze.

Planning: DR draws Vilya, Arwen, discard Vilya. I have to get past this not useful stuff to find my remaining useful cards.

Combat:
Archery 5 – Faramir 1, Glorfindel 2, Arwen 2. Arwen is dead, Celador takes 1 damage.
At this point I stargaze, then Vilya Gandalf and drop my threat to 40.
Gandalf defends the Mumak Elite, a Blocking Wargs shadow means he dies. Celador takes another damage. At this point one of my Wardens heals up Faramir and Celador.
The Ithilien Lookout defends the Spider and dies. Celador takes another damage.
Elrond and Faramir kill the Spider.
My other Warden heals Glorfindel and Celador.

And so there we go. I did miss out on some of the horrible things the nightmare deck can do – an Ithilien Overlook would have made me seriously regret my decision to leave those Haradrim Captains on their Ranger Spikes rather than killing them, and Obsidian Arrows could have had a similarly problematic impact, forcing me to assign (increased) archery damage twice in the same round. 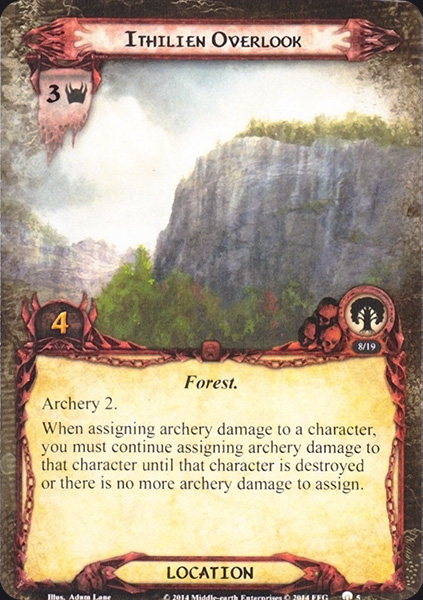 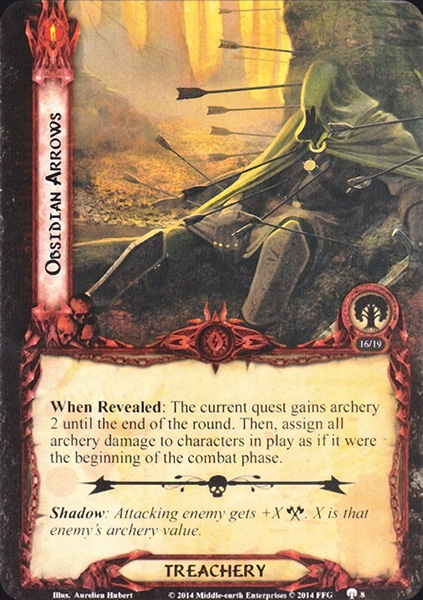 But on the other hand the basic principles worked out fine – Faramir sorted out Battle questing early, and combat power (this could almost double as Anti-Coaster Challenge – Faramir), Glorfindel was Glorfindel, Vilya sped everything up, and Wardens + Elrond made sure I survived. Playing solo I think definitely made things easier, both for the general points that solo tends to be easier because the encounter deck can’t combo in the same way and you have better chances of missing nasty stuff; and for the challenge-specific point that there are only so many things you can do with Lore and Spirit to beat a quest like Into Ithilien, so I would’ve been a bit more stuck for ideas as to a hypothetical second deck.

So there we go. Two challenges down, I’m caught up and have a week to do the current one before we move on again. And this time I definitely won’t be doing the nightmare version of the quest! …because there is no nightmare Lake-Town, it being a Gen-Con quest. As before, if you also like the idea of these sorts of deck-building challenges, head on over to the forums and join in!