I imagine a large portion of what little readership I have will be familiar with the Tales from the Cards Card Spotlights, in which underused cards are examined, analysed, and finally evaluated as either ‘gems’ or ‘coasters’. If not, then I’m sure you can appreciate the different ratings at least – some cards are multifaceted and may shine unexpectedly brightly at the right angle, whereas others are just barely fit to shield your table from moist glasses.
That said, as evocative as such a binary rating system can be, there are generally more nuances to it. While a card may well be underused for good reason, it may be worse than other options, as some member of the community are fond of reminding people, this game can be kind of easy. Which means that we don’t have to always use the most optimal cards. We can use some of these so-called coasters and still win. And in fact some not-so-powerful cards actually have fun applications, even if you could achieve the same results more easily with something else.
This is why I’m writing this article, which I intend to be the first in a series, taking cards which are less-used, considered definitively worse than more common options (probably accurately), and set myself the challenge of showing how they can actually be used somewhat effectively.

For my first Anti-Coaster Challenge, since FFG have recently announced the soon-to-be-released (possibly actually released now, it took me a few days to finish writing this) Spirit version of Theoden, I figure this is the best moment to talk about how his Tactics version wasn’t quite as bad as some people may have felt (though I do think the Spirit version will be superior). 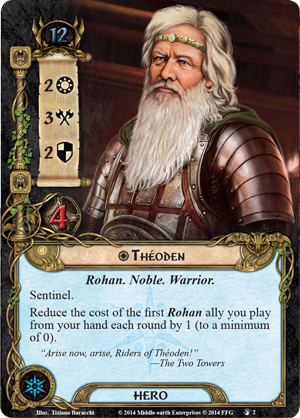 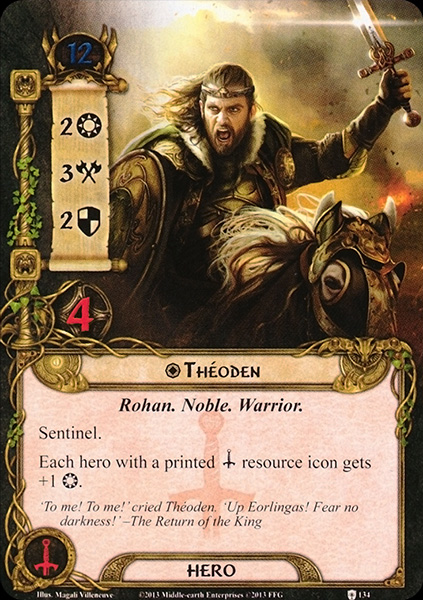 So let’s talk Tactics Theoden. His stats are good, but the boost from his ability is taken into account in his threat cost, and it’s not an ability which is going to be all that useful most of the time – in fact I think the new Spirit Theoden justifies his boosted threat cost way more than Tactics Theoden does, for all that he doesn’t have that extra point of willpower. So essentially he’s a statline, plus some traits and a Sentinel keyword.
Before I get into details, I should point out that one of the best points for Tactics Theoden is that he’s going to get a bigger bonus from his sword than his sphere-matching Spirit version who lacks the bonus willpower. And I should also point out that some of what I’m going to say in favour of Tactics Theoden will apply just as well to the Spirit version, minus 1 willpower.

So firstly, what use can one actually make of Theoden’s ability? It helps tactics contribute to questing, but in general the questing should be being done by the other spheres. Nice for Thalin I suppose, but Dain does the same (though obviously you could stack them and have a 3wp Thalin). If you want to run some sort of solo mono-tactics build you may well still run into trouble because of your lack of decent questing allies. Keep it to multiplayer then, it will if nothing else potentially help in the early game when you don’t have so many allies on the table yet. This could be more significant than it sounds, because a boost to early questing may allow you to get control of the board state rapidly, at which point it doesn’t matter so much if your hero abilities aren’t so up to snuff.
It also fits reasonably for a group using an approach more focused on using powerful heroes with readying effects rather than swarming allies. And in particular this could make a certain amount of sense if you have a quest which demands significant power in combat, so you want tactics, but also needs good questing which tactics doesn’t have – a decent example of this is of course the quest which saw Theoden’s release, The Morgul Vale. That scenario requires serious combat power to deal with the three Captains, but you can’t disregard questing even though you make no progress, because the threat can mount up and threat you out if you’re not careful. Now I’m not saying that Theoden is the way to go for The Morgul Vale – I’ve never tried it, and the Line Unbroken is a way off from me needing to. Plus, TMV is a difficult quest so I’m not sure using a sub-par hero choice is the best way to go – but in theory at least it could work.
Otherwise, the only uses of Theoden’s ability I can think of are specialised to particular quests and used more to let him enable other heroes – you can take him to the Redhorn Gate if you want to also have Beregond, who otherwise would die on stage 3, and you can take him for Stone of Erech because there he’s effectively boosting attack and the tactics heroes still have abilities which are relevant to combat. Plus then you presumably have some nice high actual attack values for the battle quest stage at the end.

So much for the ability. That leaves us with the statline, traits and Sentinel. But here, there is actually something we can do, with cards that were released in the Ring-maker cycle. Theoden is the only hero in the game who is Noble, Warrior and Sentinel. So the thought is, give him a readying effect, either Steed of the Mark or more likely Unexpected Courage. Give him Captain of Gondor. Give him The Day’s Rising. And give him Heir of Mardil. At this point he can quest for 3, ready, optionally engage, defend for 3 and if he takes no damage, gain a resource and ready to attack for 4. Sure it requires setup, but the basically-just-a-statline hero looks a bit more impressive when you add 1 to all three of his stats. And obviously you could put more on top of this, Steward, Gondorian Shield, Rohan Warhorse, all those nice attachments.
I’ve been meaning to build a deck, or more likely two partnered decks, intended to try and get this setup working but never got past the basic concept stage. I suppose now is a pretty good time to try and get those done, before they’re made mostly obsolete.

OK. So, disclaimer, these are basically just a first pass, I could probably make them better with some changes, e.g. fitting in some card draw with Foe-Hammer and Ancient Mathoms, maybe a bit more threat reduction and A Light in the Dark to work with Dunhere and Forth Eorlingas – plus some of the cards I’ve included were perhaps more thematic than useful, such as Forth Eorlingas and Charge of the Rohirrim, leaving out more standard things like Test of Will. These decks may not work consistently, with not so good draws sometimes, but if they get some of the combos into play they can be pretty effective.

Attachments (14):
Nor am I a Stranger x1
Steed of the Mark x3
Steward of Gondor x3
Heir of Mardil x2
The Day’s Rising x2
Unexpected Courage x3

I originally intended to have Erkenbrand in the second deck, but then I realised that almost all the allies I wanted were Spirit. Sticking to the Rohan theme thus meant Dunhere, which then informed a few of the other choices, like Secret Vigil and Spears of the Mark. As noted above, they may not be especially consistent, and I’m sure I could make them better, but they were pretty successful on a test play, and very fun.

For my test play I decided to take the decks against Assault on Osgiliath. In retrospect, that was probably not such a great idea since each copy of Ruined Square goes back to the staging area when a character leaves play, precluding use of Escorts from Edoras, among others. Though, I’m fairly certain I misplayed those, should’ve lost a couple to Gandalfs. On the other hand it’s likely enough I would’ve got them back in time to lose them again the time that I actually remembered their effect.
I never got my Steeds of the Mark, didn’t get most of my weapons or most of the Tactics events. On the other hand I did get the big Theoden combo up and running – Steward of Gondor/Unexpected Courage/Gondorian Shield/Captain of Gondor/The Day’s Rising/Heir of Mardil. So he quests for 3, readies with UC, optionally engages, defends for 5, takes no damage, gains a resource from TDR and readies by HoM to attack for 4 (5 or 6 with a Dagger of Westernesse). Got a lot out of that. Also, I found myself with more resources than I needed a decent amount of the time, so I was able to save Steward to still ready him even if he actually took damage and thus invalidated TDR. I did have a nice Forth Eorlingas play to kill two Uruk Lieutenants – unfortunately this was before I got NaIaS onto Merry, but I only needed Theoden for one and Eomer for the other anyway. Theoden’s ability also does come in kind of handy just for the early game, allowing him and Merry to quest together for 6 and leave Eomer up for combat.
Memorable issues were with the aforementioned lack of card draw (though I did use Gandalf to help with that), getting an enemy which attacked from the staging area, since then Theoden didn’t have the bonus from Captain of Gondor (add in shadow effects and he was left with one hit point remaining) and the location which turns the quest into a battle since that meant I had to use my combat characters to quest (but that can be a problem with a lot of decks). Inconsistent draws again probably would be a problem that would come up with more testing – I can’t always depend on getting Theoden up at full crazy power doing everything. On the other hand, if I don’t get those bits, I’ll have other things, like maybe I drew more than one Unexpected Courage, or I got more horses and Charge of the Rohirrim, or more weapons, and so on.

In conclusion, Tactics Theoden, while somewhat justly maligned as a low-tier hero, is nonetheless entirely playable (as are some other cards which I don’t think see much use, like Forth Eorlingas and Charge of the Rohirrim), not to mention quite fun. Not a complete coaster. If people are interested, just to emphasise the point, I might try and do a mistake-free playthrough of another difficult quest (maybe a nightmare) and do a full write-up of it.
“Up Eorlingas! Fear no darkness!”

8 Responses to Introducing the Anti-Coaster Challenge